At University Alliance, just like our universities, our approach is about putting solutions, innovation and enterprise at the core of everything we do – for the wider public and economic benefit of the UK.

We conduct, promote and disseminate research and analysis into matters related to higher education, including higher education policy, to inform and improve public and political discourse about the value of universities and the public benefit they deliver.

In taking a non-partisan, non-political approach we are able to bring together thought-leaders and experts from across the sector as well as government, industry and other charities to identify solutions that will sustain a world-leading, enterprising and innovative higher education sector. 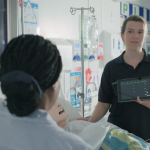 We submitted our response to the Government’s consultation to reform healthcare education funding in June 2016. Read here or click on the image to download our response. The Government has [&... 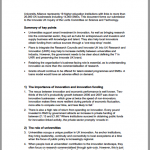 University Alliance has responded to the House of Lords Science and Technology Committee Inquiry into the future of Innovate UK. Our submission was cited in a letter from the Lords […] 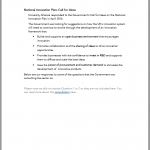 University Alliance responded to the Government’s Call for Ideas on the National Innovation Plan in April 2016. You can read our recommendations by clicking on the document image or here. 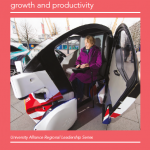 Creating innovative regions: The role of universities in local growth and productivity

Follow this link for case studies from Alliance institutions Our latest report aims to bust a myth – that the main contribution of universities to innovation is through the commercialisation ... 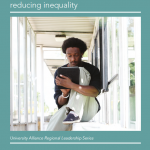 Supporting thriving communities: The role of universities in reducing inequality

Follow this link for case studies from Alliance institutions The government’s ambitions for higher education to improve life chances will only be met if university leaders make tackling inequality ... 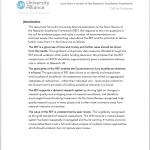 UA responds to the Stern Review of the REF

University Alliance has issued its response to Lord Stern’s review of the Research Excellence Framework. Its recommendations include: The REF should recognise and reward dynamism by using productiv...

Building healthy cities roundtable: The role of universities in the health ecosystem

University Alliance and UWE Bristol organised a roundtable event on the role of universities in the local and regional health economy. The discussion took place in Bristol on 14 March […] 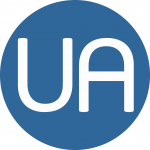 Written evidence to the Apprenticeship Inquiry

Our evidence to the Apprenticeship Inquiry of the Commons Sub-Committee on Education, Skills and the Economy looks at a number of the key issues the Sub-Committee is attempting to address. […] 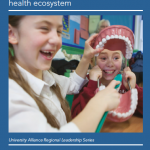 Building healthy cities: the role of universities in the health ecosystem

Building healthy cities: The role of universities in the health ecosystem is the first study of its kind examining the ways in which universities as anchor institutions relate to regional health [&... 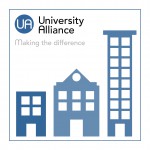 Read our response to the Government’s Green Paper: Fulfilling Our Potential: Teaching Excellence, Social Mobility and Student Choice. (Either click on the link above or the image) We agree th...