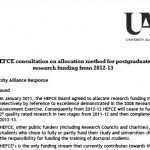 Consultation question 1: Do you agree that for 2012-13 we should increase the value of the RDP supervision fund, by up to £35 million?

Consultation question 2: Which of the options we have described for linking the allocation of RDP supervision funding to quality (a threshold, or a quality weighting) best meets our aim of encouraging the supervision of students in higher-quality research environments? Why?

Consultation question 3:If we used a quality score, as described in paragraph 22, to achieve differentiation by quality does a ratio of 1:2 seem appropriate?

Consultation question 4: Do you consider that the value of an institution’s RDP grant relative to its mainstream QR grant provides a useful indicator of the sustainability of postgraduate supervisory activity at whole-institution level?

Times Higher – Research funding: report affirms it should be based on excellence, not size

Concentrating research funding on large departments would not improve research quality or productivity, according to a report commissioned by the University Alliance.

The mission group, which represents 23 “business-engaged” universities, most of which have relatively small departments, asked the data provider Thomson Reuters to analyse citation profiles and the results of the 2008 research assessment exercise for evidence.

The resulting report, published this week, finds a “significant positive correlation” between research unit size and RAE score, especially for smaller units. It also proposes that there may be a “critical mass” below which units are not viable, although “this is likely to be relatively small and differ between subjects”.

In terms of the citation counts garnered by papers submitted to the RAE, the report finds that smaller research units typically perform less well than large departments, but notes that there are median-size units that perform “as well as, if not better than, larger research units”, while “the very largest research units do not seem to perform better than those of around median size”.

It speculates that, rather than scale driving excellence, excellence enables small research units to grow by allowing them to attract more funding, while poor performance causes large units to shrink. “If funding was to be concentrated on the basis of scale, small excellent units would be lost. The effect of this would be to stifle the research base,” it says.

The report, Funding Research Excellence: Research Group Size, Critical Mass and Performance, also finds no significant correlation between unit size and researcher productivity. It says that peak productivity, in terms of papers produced, is often found in departments of median size, adding that “funding on the basis of scale would not improve overall productivity but might eliminate some of the best units”.

Libby Hackett, director of the University Alliance, said the report was a response to the mission group’s concern that some in the research community – such as research council chief executives and Sir Adrian Smith, director general for knowledge and innovation at the Department for Business, Innovation and Skills – were misinterpreting the government’s “official line” about the importance of concentrating funding on excellence.

Some research councils have moved to confine their PhD studentships to larger units, while BIS has instructed the Higher Education Funding Council for England to limit research funding to “research centres of proven excellence, with the critical mass to address national challenges and compete internationally”.

Hefce responded by cutting the amount of research funding allocated on the basis of two-star (“internationally recognised”) research.

Ms Hackett said she strongly backed focusing funding on excellence but said that the report proved that this was not the same as concentrating it on large departments: “We would like the government to reiterate that funding on the basis of excellence alone is the best way to strengthen the UK research base.”

This week’s blog post is taken from a piece I wrote for the Guardian.

Research was notable by its absence in the HE white paper, leaving a large hole in the government’s plans for the sector. Recognition of its importance to higher education and its inter-relationship with issues related to the teaching of undergraduates, which features so prominently in the document, should have been included. Research has no need of revolution but as a central tenet of UK higher education, it seems incongruous not to build other policies on the foundation that it provides.

University Alliance institutions are proud of the world-leading research that they undertake. They have proven their quality through the national, peer-based assessment of research quality (the RAE) and are confident of doing so again in REF2014. Our report; Funding Research Excellence, published today provides compelling evidence that research should continue to be funded on the basis of excellence alone. There are many examples of small research units in Alliance institutions that undertake world-leading research and are recognised as such; they have no need to grow in order to prove themselves. Indeed our research shows that quality is a driver of scale and not vice-versa. We can be confident in stating that this is the case for the vast majority of disciplines.

The arguments about research funding have been the same for more than a decade and they generally fall between two opposing camps. Those that believe that we should concentrate research funding into fewer institutions with greater scale, and those that seek to distribute the funding on the basis of quality alone to ensure that the money follows excellence. There is a school of thought that suggests we need a ‘critical mass’ in order to carry out world-leading research. This is wrong and we now have the evidence to prove it.

Our report also demonstrates that there is no significant correlation between productivity and research unit size. Any funding metric based on scale would not improve productivity. In fact, the evidence is clear; it could even have the effect of excluding some of the very best units from funding. Let us be in no doubt about it – taking money away from high-performing, small research units would wither the UK research-base and damage our global reputation for excellence and innovation.

With scarce public resources, it is imperative to chart a way through all political pressure and ensure that funding follows quality. The stakes are high; the long-term health and sustainability of UK research must be protected. Future local, regional and national economic growth depends on it.

The government says it seeks to fund research on the basis of excellence. However, the erroneous assumption that ‘critical mass’ is a driver of excellence creeps in from time to time. The BIS director general for Knowledge and Innovation said last month that the government was striving towards creating ‘critical mass’ in order to drive excellence. The government is right to encourage collaboration and pooling of resources but this must not preclude the existence of smaller research units where they can demonstrate excellence with impact.

We must not stifle UK research by seeking only to reward the biggest. They are by no means always the best. To improve the international standing of UK research we must continue to run an open and competitive system for research funding, based on quality alone.