University Alliance says investment in HE ‘crucial’ for UK economy

“Investing public funding in higher education is just that – an investment.

“UK universities are generators of economic growth and wealth creation. The UK invests 1.3% of GDP in its higher education sector and universities, in return, contribute 2.5% of GDP, [2] generating an estimated £59 billion in the UK economy every year. [3] Furthermore, their social and cultural impact as centres of knowledge, learning and enterprise make them powerful instruments of change and social justice.  At any point in time it is crucial to maintain public investment in higher education in order to drive the UK knowledge economy and, at a time of recession, even more so.

“Banking and higher education have both previously been described as the jewels in the crown of the UK economy. As a new economy takes shape, this Government and any future Government needs to consider carefully the consequences of the substantial cuts that have been announced for universities. In a tight fiscal environment the choices are stark but the importance of public investment in higher education for our future economy cannot be overstated.

“Even with the full additional fee income, three years after the introduction of variable fees in 2006, the sector is still 22% below 1989 funding levels in real terms.[4] Independent research undertaken by the Financial Sustainability Strategy Group for HEFCE proved that the sector did not enter a new era of affluence with the introduction of fees but remained under-funded.  The report concluded that without further investment the “quality of the student experience and the reputation and contribution of English higher education will suffer.”[5]

“The proposed cuts in funding for additional student places are difficult to reconcile with the projected economic demand for highly-skilled graduates as outlined in the Government’s own reports such as the Leitch and Sainsbury Reviews.  Increasing numbers of applications from qualified students mean that these announcements will result in a new era of significant unmet demand for HE.  Given the future skill needs of the economy and the fact that we are in a period of recession, this seems both counterintuitive and short-sighted.

“A recent report by University Alliance [6] has demonstrated that a policy of selectively funding research based on excellence has driven the quality of the UK research base, not concentration.  An explicit policy of concentration either by institution or by an arbitrary historic level is not in the interests of the UK. Selectively funding research, based on quality, will achieve the most efficient and effective allocation of public investment in research.

“Universities have striven to diversify their sources of funding and have continued a pattern of reducing dependency on public funding. Alliance universities obtain less than 50% of their income from core public funding.  Private income should supplement, however, not replace essential public investment in higher education.  The question of appropriate balance between public and private funding must not be informed by economic considerations alone.

“The Independent Review of higher education funding and student finance has a responsibility to step back from the immediate pressures on departmental budgets to ensure a long-term, stable system that meets the needs of students, universities, tax payers and the Government. Quality and access must be maintained.”

[3] Universities UK report on economic impact can be downloaded here. 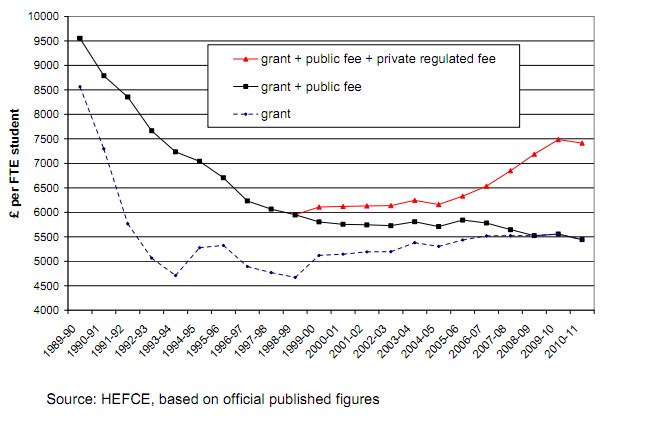 Notes:  the effects of ELQ funding being removed and unfunded growth are not reflected in 2010-11 figures

[5] HEFCE Report can be downloaded here.

University Alliance represents 22 major, dynamic, business-like universities at the heart of the sector that deliver world-leading research with impact and are actively businessfocussed.  Alliance universities educate 26% of all UK students and achieve some of the highest graduate-level employment rates.  These universities offer a research-informed, academic learning environment and a culture of entrepreneurialism, equipping graduates for the 21st century.