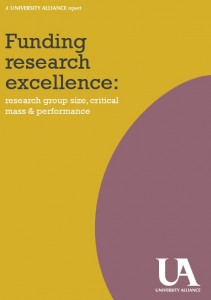 Funding research excellence, conclusively demonstrates that the Government should not bow to pressure to fund research on the basis of scale; there is no evidence to support the claim that this would produce better research. On the contrary, the evidence points to quality being a driver of scale and not vice versa. The main findings of this research are compelling: that the UK should continue a policy of funding excellence wherever it exists.

The report was commissioned by University Alliance from Evidence Limited (of Thomson Reuters) to examine the relationship between research excellence and volume, or ‘critical mass’, in order to identify how best to invest public money in research. What has emerged is clear evidence that there are many small and medium-sized research units that perform as well as, and often better than, the largest units.

The report also shows why there is no significant correlation between productivity and research unit size. The data provides clear evidence that funding should always follow excellence wherever it is found, as any metric based on scale would not improve quality or productivity.

“This research gives us the evidence to demonstrate that research funding should continue to follow excellence and there is no justification for re-directing funding to the big departments.  We are proud of the world-leading research taking place in University Alliance institutions. Sometimes smaller in scale, these research units have proved their value through the objective, peer-assessed RAE.

“It is clear from the evidence that there are small and medium-sized research units that perform as well as, and often better than, the largest units. It is also clear that growing these units would not necessarily show further improvement in quality or productivity.

“Our institutions carry out world-leading research and will continue to do so. Given the pressures on the sector and public funding more broadly, now is not the time to reduce the return on investment for research. Funding must continue to follow quality or we could see a long-term withering of the UK research base, which would be hugely detrimental to UK PLC.”

“If funding was to be concentrated on the basis of scale, many units recognised as world-leaders in their research could ultimately miss out on funding. The effect of this would be to stifle the research base and harm the sustainability of the UK research-base, which is respected and renowned across the world.

“The stakes are high.  Sustaining and building the UK research base must be core to any strategy for growth in the UK economy. We must also recognise that postgraduate students will be the next generation of researchers and so it is imperative that we build environments that enable them to grow. If we take funding away from some of the highest performing research units across the sector purely because they are small, we risk jeopardising the UK’s future as a world-leader in research and innovation.”

University Alliance is a group of 23 major, business-engaged universities committed to delivering world-class research and a quality student experience around the UK. They are universities without boundaries: delivering economic and social growth through close links with their research, students and staff and the world around them – locally, nationally and internationally. With representation right across the UK they educate over 25% of all UK students, with large proportions of international and post-graduate students.