This app can change your life 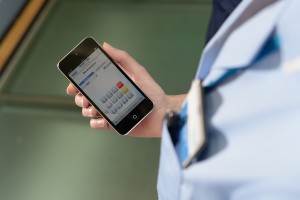 A clinical system, used in a handheld device such as an iPad or smartphones ‘watches’ patients’ vital signs, saved almost 800 lives in its first year. The Learning Clinic developed the VitalPAC system with help from medics at Portsmouth Hospitals Trust and clinical outcome modelling experts from the hospital and the University of Portsmouth.

There’s an app I’m watching closely. I’ve anxiously followed it through funding and development. I signed up for beta testing (still waiting to be tapped on the shoulder there…) and a year or so after first hearing about it, I’m drumming my fingers impatiently for public release.

No, it’s not the latest version of one of those popular fruit-based puzzles or beach battle strategy games.

It’s called ‘Ava’ – and ‘she’ would help you to follow what people are saying around you in real-time. As a deaf person, it will be a boon in meetings or conferences, but perhaps much more so when I’m in the pub with friends. The killer sales pitch?  The developers, a small tech company in San Francisco (who are a mix of both deaf and hearing Berkeley and USF graduates from the US, France, Holland and Taiwan) promise ‘you’ll never miss a conversation again’.

The last time I counted down the days for an app to be released it was for Next Generation Text App (or NGT Lite as it is fondly referred to by those who use it). What it lacks in catchy title or even high-tech graphics, it more than makes up for in transforming how I communicate with other people – allowing me to use a mobile for real-time conversations for the first time ever.  Only two decades or so after everyone else discovered, for example, the pleasure of having a conversation on their daily commute, I now have the same freedom to talk to anyone whenever I want.

You may never have heard of either but it is new digital technologies like these that help us to overcome challenges, big or small. From setting training milestones to motivate you to get off the sofa and run 5k, 10k or even 26.2 miles in the London marathon to creating a moment of inner calm through daily mindfulness exercises.

Such apps may typically be associated with small tech start ups in the UK’s Silicon Roundabout in London. But some of the most innovative ideas are actually coming out of universities elsewhere – often with a stronger social purpose than the latest hot new game.

For example, Plymouth University’s Brush DJ, a free app designed to encourage youngsters to adopt and maintain an effective oral health care routine, has been downloaded on more than 197,000 devices in 188 countries.

There have been impressive numbers of downloads for SAM app a free self-help app for anxiety – – more than 500,000 users worldwide in more than 100 countries. It was developed by psychologists, computer and engineering scientists at UWE Bristol and the Bristol Robotics Laboratory, working in collaboration with teams of students, mental health practitioners at UWE, in the NHS and in private practice and external app development company MyOxygen.

With one in four people in the UK experiencing a mental health problem each year, SAM App and a new friendship app Rescue Station being developed at Manchester Metropolitan University, provide vital resources for them.

The range of apps coming out of our universities is staggering. Baby Buddy is a free mobile phone app for parents and parents-to-be with personalised content approved by doctors and midwives which UWE Bristol helped to devise. Sleepstation was devised by one of the UK’s leading sleep experts with support from Teesside University’s Digital City, to help millions get a better night’s sleep through Cognitive Behavioural Therapy.  University of Salford academics, along with colleagues at Lancaster University, developed the Walking bus app where registered parents visually track the route on a map in real time, easing any fears they may have for their child’s safety.

Beyond those used on a personal level, universities’ innovations can lead to far wider impacts for our communities.

VitalPac, developed by The Learning Clinic with help from Portsmouth Hospitals Trust medics and clinical outcome modelling experts from the hospital and the University of Portsmouth, is used in a handheld device such as an iPad or smartphone. It ‘watches’ patients’ vital signs, saving almost 800 lives in its first year. More than 30,000 doctors and nurses across 51 hospitals now use the system.

Meanwhile a simple cookery task created by a researcher at Sheffield Hallam University, sets people recovering from brain injuries the job of cooking a chilli con carne. This help doctors to make a speedy diagnosis and create a programme of rehabilitation. Plymouth residents can report road repairs and vote which should take priority in an urban innovation programme (supported by Plymouth University) trialling the Changify app. This was developed by an entrepreneur after she rode her bike over a huge pothole in London and was thrown in front of a lorry.

So it’s no small boast to say these apps can benefit how all of us improve our health, wellbeing and communities. As these examples demonstrate, the ingenuity and skills of researchers in our universities, often working in collaboration with business and other organisations, can make it possible to completely change our lives.