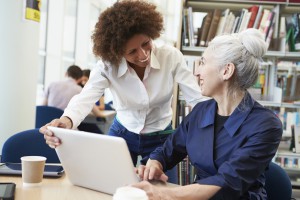 A few years ago I conducted some research into the gender and ethnicity attainment gap in higher education and I was surprised by the number of lecturers who told me they didn’t ‘see’ gender and ethnicity, they just treated all students the same. I thought this was rather an uncritical starting point, because there’s lots of evidence that we treat people differently all the time for a whole range of reasons. So when I was asked to give a talk for International Women’s Day, I seized the opportunity to talk about unconscious bias and what its implications are for those working in HE.

For obvious reasons, the talk focused on women – but when you look at educational attainment in the UK, women are out-performing men at all levels and this impacts on university applications. The gender gap in British universities has almost doubled in size since 2007, and it’s particularly large in certain subject areas. This is such a serious issue that David Willetts called for white working class boys to be treated as a disadvantaged group in access agreements.

Yet in the workplace, you see a very different pattern. There remains a significant pay gap between men and women in almost all countries of the world. A recent UCU report suggests that, based on the rate of progress over the last 10 years, it will take until 2050 to close the gender pay gap in HE. Despite all those high achieving girls in school and university, despite the fact that nearly half of the academic staff in higher education are female, the proportion of female professors is a pitiful 23%. If you are a black female, the situation is even worse – there are reported to be only 17 black female professors in the UK.

There are clearly a whole range of reasons for these statistics and they include the choices made by women themselves. But that’s not enough to explain the differences that exist. An increasing body of research demonstrates some of the barriers women encounter in academia. To give one example, a study by Corinne Moss-Racusin involved recruitment to a science lab. Half the scientists in the study were given an application with a male name attached, and half were given the exact same application with a female name attached. What they found was that “female” applicants were rated significantly lower than “male” applicants in competence and hireability – and in line with this they were offered a lower starting salary. Interestingly, the gender of the evaluator didn’t make any difference; both male and female participants in the experiment graded “male” applicants more highly.

What is even worse news for female academics is that this bias seems to persist in other areas of academic work such as research publications and teaching. Although there is contradictory evidence, some research shows that papers with a male author are rated more highly than those with a female author and there is increasing evidence that student evaluations are systematically biased against female lecturers.

All this illustrates how pervasive the issue is. So is it any wonder that we have very few female professors?

But what’s particularly interesting is that many women report encountering very little overt prejudice in their working lives. It seems that a lot of the barriers may arise from unconscious bias. These are out of our control, involving unconscious judgements of people and situations influenced by our background and our experiences in the world.

Everyone thinks that they don’t have bias, but try this quick and easy online test – Harvard Implicit – which shows that most people do, and in many cases these run counter to explicitly held beliefs. Work by Daniel Kahneman suggests ‘fast thinking’ may be to blame: Our brains frequently make very quick associations between things, fill in gaps through guesswork where information is limited and make systematic errors.

We are also heavily influenced by our environment – and that environment is gendered. From the moment we are born, we are treated differently based on our gender (Delusions of Gender by Cordelia Fine is a great overview of this). As we grow up, gendered expectations increase. We absorb stereotyped information from the toys, clothes, films, music, media, and all around us. When we move into the work environment, even so-called ‘benign stereotypes’ can act to slow women’s progress. Research tells us that women are judged more negatively than men when making the same kinds of statements in the same tone. And gendered expectations of who does which job area widespread. You only have to google ‘professor’ to get a series of images of white middle aged men (Professor McGonagall being a notable exception!)

Some of the work which we’ve done at Plymouth has looked at how to reduce the impact of unconscious bias in HE. In particular, we’ve developed guidance for mitigating unconscious bias in teaching and learning. As a general rule, there are three key steps:

Examples include setting clear criteria before making an evaluation or assessment (and sticking to them!); asking for specific examples rather than generalising; and trying not to make decisions when tired or stressed as you are more likely to revert to ‘fast thinking’ with all the possibility of error and assumption.

But overall, have high expectations of the environment you want to work in: Equality is a value which many in universities hold dear, but it is clear there is still some way to go to achieve it.

This blog post is based on a talk for International Women’s Day: A Plymouth Conversation on 8th March 2016.