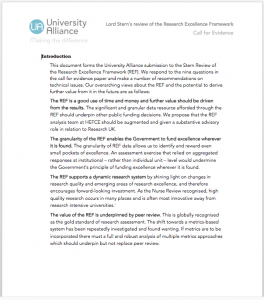 University Alliance today issues its response to Lord Stern’s review of the Research Excellence Framework. Its recommendations include:

“The dual support system is the crucial element underpinning the diversity and excellence of research taking place in the UK.

“The REF has proved a cost-effective and flexible tool for rewarding excellence wherever it is found. It has been successful in supporting universities’ world-class research, helping tackle global challenges and ensuring that real-world impact receives the recognition it deserves.

“Universities undertake 75% of the UK’s publicly-funded research, so even more value can and should be derived from the REF evidence about our national research capability.

“Lord Stern’s review must build on – and not undermine – the REF’s strengths. In our consultation response, we make a series of practical, workable suggestions for fine tuning the REF process, lightening the burden and facilitating better information sharing and use.”

The call for evidence on the Research Excellence Framework review was published on 27 January 2016 and closes today.

Coverage of our response has appeared in Times Higher Education – you can also read our full response to the Stern Review here.