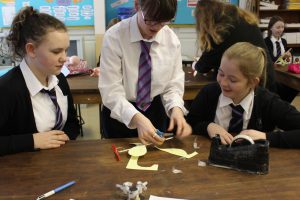 When I was at secondary school, we were told that an engineer was coming in to talk about their career.

Several of my female classmates started moaning that this wasn’t fair – why would they have to sit through a boring talk by yet another man who they couldn’t relate to?  Some boys retorted that was because ‘engineering was for men’.

Our teacher insisted everyone had to go.  And as the engineer was introduced by the Head, all eyes alighted on the unknown woman standing at the front of the room.

These days, I hope we would be less likely to assume that an engineer visiting a school will be male.  But only 9% of engineers are female and the UK has the lowest percentage of female engineering professionals in Europe.

The Women’s Engineering Society (WES) is working hard to change this. WES is a charity started in 1919 at the end of the First World War when women who had worked in technical jobs during the conflict wanted to continue doing so. Although welcomed into the profession during the war, women were under pressure to leave the workforce to release jobs for men returning from the forces. The organisation was founded not only to resist this pressure but also to promote engineering as a rewarding job for women as well as men.

Today is National Women in Engineering Day, which was first set up by WES two years ago to focus attention on the opportunities this career offers at a time when it has never been more important to address the engineering skills shortage.

Our universities have also been striving to break down the barriers to and assumptions around STEM careers for women. Some of Plymouth University’s key technical hardware including the Ocean Wave Basin and ship simulator is part of a showcase to encourage more women into engineering and science careers. 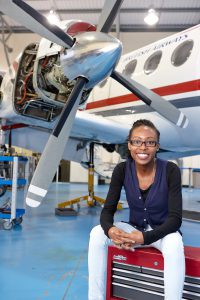 The University of South Wales worked with a local comprehensive school to inspire girls into the field. They collaborated with female pupils to design a project, which includes tasks such as building a rubber band helicopter and CD hovercraft, that could be taught by teachers in the future.

Within our universities, female engineering students and researchers are helping to inspire more young people to study the subject.

Natalie Simpson, who graduated with a first class BSc (Hons) Aircraft Maintenance Engineering degree, was named British Airways AME (aircraft maintenance engineering) student of the year.  USW has a unique partnership with British Airways and is the only university in the UK that has integrated the industry-standard aircraft maintenance qualification ‘EASA Part-66’ with an Honours degree and delivers it on campus.

Sports engineering PhD student Alice Bullas is concerned with improving the performance of another form of transport – the cycle.  Based in Sheffield Hallam University’s Centre for Sports Engineering Research, she is currently looking to recruit some high-level recreational, semi-professional or elite male cyclists aged between 18 and 45 to take part in a study looking at how body size and shape can impact on performance.

The research uses 3D imaging scanners to analyse the performance of riders or road, track, BMX or mountain bikes. 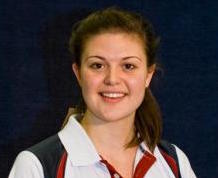 Alice was part of the engineering team that helped Guy Martin break a world record in the Channel 4 programme, Speed with Guy Martin. Both Alice and her colleague, Christina King (business development manager at Sheffield Hallam’s Health and Wellbeing Research Institute for Sport) – who was also involved in the programme – will be speaking at a conference at the Institute of Mechanical Engineers today as part of a NWED event.

The statistics illustrate the scale of the challenge ahead. Initiatives like these, and the focus which National Women in Engineering day brings – show us how we can make sure the gender gap is finally bridged.