Skip to content
University Alliance > Blog > The rise of the (all-singing, all-dancing) robots

The rise of the (all-singing, all-dancing) robots

I knew someone once whose solution to the ‘challenge’ of housework was to buy a robot vacuum cleaner.

The obvious bonus was clean floors. But for its owner, boring chores were transformed into an interesting and unexpected relationship with technology as the robot quickly became the newest member of the family. Although they didn’t have a cat to ride on it, like in this video.

Leaving aside for now the expense (it was certainly not a budget appliance!) and daily emptying of the surprisingly small waste container, this was a robot in the house and it looked like something you’d see on the big screen in blockbuster films. 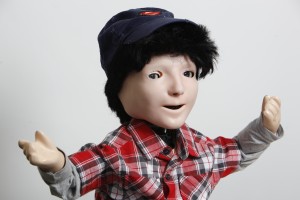 It even made ‘happy’ beep-boop noises during its daily journey across the floor zapping fluff – without complaint (apart from when it once got stuck on some flappy curtains which resulted in the most doleful moan).

Robotics and autonomous systems are changing many aspects of our lives – as the first ever UK Robotics Week, which begins today, is exploring this week… ‘We are now reaching a point where science fiction is coming closer to science fact’.

I’ve been lucky enough to see some of the exciting and innovative technologies coming out of Alliance universities.   These are revealing how they and other assistive technologies can help people live fuller, happier lives. The breadth of where these autonomous machines can be used is almost limitless – from healthcare to protecting the environment and from entertainment to advanced manufacturing. They can even be used in the hostile conditions of space. 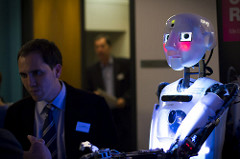 Just as importantly, they are also helping us to understand our relationship with technological advance and what it means to be human.

At our summit at Coventry University this month, we were hypnotised by the robot that solved the Rubik’s Cube in the shortest time possible, while another from the Institute for Advanced Manufacturing made incredibly precise movements along a complex path.

Dancing contentedly throughout the exhibition was a nao robot, which is part of a project by PhD research student Ariel Ruiz-Garcia from the university’s School of Computing, Electronics and Maths. His project is studying emotion recognition and empathy imitation in a social robot. (See the video at the end of this blog).

Social robots can provide companionship for the elderly and assist with treatments or like Kaspar from the University of Hertfordshire help teachers and parents support children with autism.

On another occasion, I met the life-sized (and larger than life) RoboThespian at Oxford Brookes University who sings musical numbers, recites Shakespearean speeches and performs classic movie lines. He is also fully interactive, with a wide range of facial expressions and greetings. When you’ve shaken hands with this robot, you won’t forget it. While designed for human interaction in a public space, he also helps us to explore our love-hate relationship with our technological creations and ability to anthropomorphize and see life where none exists. 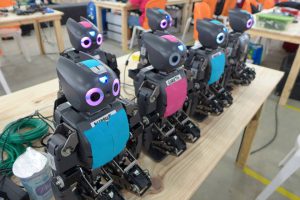 And should England or Wales falter in the Euro Cup in France, fans could cheer for another home team at the forthcoming RoboCup 2016 robotic world championship which kicks off in Leipzig, Germany on Thursday 30 June. Bold Hearts, the University of Hertfordshire’s robot football team – the oldest and most successful in the UK – will be competing against 500 other teams from 40 countries.

But why are our universities developing robots that can use expressions accurately, be empathetic, play sports or learn from its mistakes?

As we are starting to see robots in our daily lives, it is important that we are comfortable with them.  A research team at Plymouth University studies how people and robots interact with each other. It was a lead partner on the pan-European ALIZ-E project that set out to create a more socially-interactive robot, which could provide companionship to children in hospitals. The project also explored the ethics of human-robot interaction.

Beyond the familiar humanoids, robots can come in all shapes and sizes and help us find solutions to some of the world’s most pressing challenges.

A team at Nottingham Trent University has been collecting aerial imagery to better understand environmental changes in the Arctic. They are using robotic drones to map and quantify ice loss within a 125-year-old section of buried glacier ice in Svalbard – a Norwegian archipelago in the Arctic Ocean.  They team used 2,000 aerial images to create a 3D model of the landscape and compare it against a model of the landscape produced from archive aerial imagery from 2003.

Stroke sufferers could learn to walk again with the CORBYS robotic exoskeleton developed by the University of Hertfordshire that works and adapts with the patient to provide individualised therapy overseen by a professional.

And from one form of transport to another – driverless cars are being developed in an exciting collaborative project by the University of West of England (UWE Bristol) and the Bristol Robotics Laboratory which have the potential to transform the lives of isolated older adults, reduce loneliness and give people who do not drive greater freedom without relying on others.

Robots used to be the stuff of dreams. But the unprecedented speed of technological change is already creating a world where futuristic innovation is pushed out of the lab and into our homes and offices.