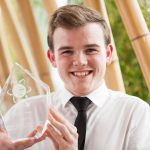 First year student at Sheffield Hallam University, where he is studying aerospace engineering 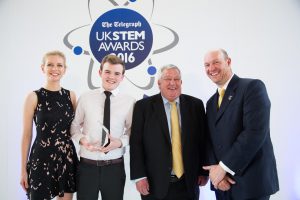 TV presenter Rachel Riley was among those presenting the trophy to Warren.

Warren Frost, a first year student studying aerospace engineering from Sheffield Hallam University, has won the overall Telegraph UK STEM Award, taking home the £25,000 prize and a place in the awards mentoring scheme. Below, the 20-year-old from Worksop reveals how he came up with an ingenious solution to help minimise the impact of a future volcanic ash-cloud event on air travel.

A few months ago I started thinking about the impact of the volcanic ash clouds and how they affected air travel following the eruption in Iceland in 2010. Little did I know that those early thoughts and ideas would lead to me winning a national competition, a dream internship with one of the most prestigious companies in the world and to top it off, a cheque for £25,000!

It all started in February 2016, while I was looking through what placements Rolls Royce had to offer I noticed the competition for somebody to create an idea to minimise the impacts of volcanic ash on air travel. Looking at the competition I initially thought that I wouldn’t have a chance as it is a national award with great sponsors, believing I didn’t have the brains or the confidence.

I knew from my studies that there are three main problems caused by volcanic ash within a jet engine, all of which cause serious damage and are expensive to repair.

A few hours later I thought of a concept that just might work inspired by a lecture I had earlier that day. During lectures and tutorials at Sheffield Hallam University I am always encouraged to think differently, encouraging me to create concepts that might at first seem impossible but should be physically possible. This particular idea was inspired by a lecture by Dr Torsten Schenkel on jet propulsion and other weird and wacky propulsion methods, such as the Magnus effect.

My idea would work by blocking airflow through the core of the engine, so that the ash can’t get into the core and damage the vital components. This would defy all conventions of a jet engine as it is ‘air-breathing’ but taking the principles of a rocket engine, using oxidiser instead of air, then the engine may still be able to operate. I immediately searched the internet to try and find if this had been thought of before or if any research had been posted to determine whether this was even possible. I couldn’t find one page or article that related to what my idea proposes.

It was after researching the fundamentals of my idea that I realised this would be worth a shot as it is a unique idea to tackling the problem set out within the challenge.

A month later I had an email from the Telegraph (who run the awards) saying that I had been shortlisted down to five within the aerospace category and inviting me to present my idea to Rolls Royce in Derby. I couldn’t believe that they had chosen my idea with four others out of so many entries to go and present to them in person.

On the day down in Derby, I got the opportunity to look around some of the facilities that Rolls Royce had and got to see the work of a world class company first hand. I went into the presentation nervous, as I was against four people all with great ideas, and all the judges had very stern faces as I talked them through my idea. I was slightly relieved by the questions they had for me, because I had already thought about the solutions to the problems with my idea. Overall, it was an amazing day where I got to see lots of awesome stuff and meet some great people.

Later that month, I had another email from the Telegraph letting me know that I had actually been chosen by Rolls Royce to progress to the final, winning the aerospace category of the competition and a summer placement! This was fantastic news, I had always wanted a placement with Rolls Royce, because they have such a great training program and are such a prestigious company to work for.

The next stage of the competition took me to London to present my idea to Babcock. I was up against the winners of the design, energy, healthcare and innovation categories, and after speaking to the other finalists I knew instantly that it would be a tough final as there were contestants from the likes of Oxford and Cambridge universities. Going into the final presentation, I was surprisingly more relaxed than when I went into the semi-finals at Rolls Royce, as I had already presented I felt I was more prepared for what was to come and also excited by the possibilities. I was told afterwards that the winner would be announced at the awards ceremony in June and couldn’t wait to find out!

On the day of the awards I woke up nervous and also excited for what was to come. When I arrived at the building the first thing that hits you is the height and size of the building and to make it even better the event was on the 39th floor at a high end venue called SushiSamba. The glass lift on the way up was breath-taking, with a view of the whole of London. Walking into the awards I was greeted with champagne and there were lots of people all wanting to congratulate me on getting this far.

The ceremony started over lunch with Rachel Riley from Countdown presenting the awards. As we had lunch, and more champagne, we watched through videos from all the finalists and had speeches from all the sponsors involved. It was time to announce the winner; the tension was building in the room. Rachel Riley opened the envelope took one look and announced, it was me! I just looked to the sky, I was truly amazed that it was me; my eyes were welling up with tears. That has truly been the best day of my life, the day that I will look back on and think “this is where my life starts”. It still hasn’t really sunk in what I have achieved. It just goes to show that no matter where you come from you can do it, all you need is drive and determination to achieve great things.