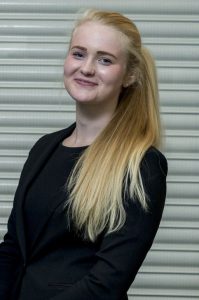 We’ve all seen the images of students jumping for joy with their A-level results clutched tightly in their hand.  For those who had applied to university, they would have known early via Ucas Track in the morning if their place had been confirmed.

But if you missed out on the grades you need for your preferred course, don’t panic. Like Holly, featured in our story below, realised, going through clearing could offer new opportunities and options, rather than barriers to your dream career.

Law student Holly Nelson came to Sheffield Hallam University through clearing following a tough rejection from her first choice university. She has now graduated with a first class law degree, achieved a prestigious scholarship from one of the four Inns of Court and has been offered pupillage by a Barristers’ Chambers.

Holly, 22, from Coniston in the Lake District, now credits the clearing process, and Sheffield Hallam University, with helping her get ever closer to her dream of becoming a QC.

“I studied the International Baccalaureate at college and it wasn’t that well thought of at the time with my first choice university. I missed out on by one point and was left waiting to find out if I would still be accepted. It wasn’t until 4pm that I finally found out that my first choice had rejected me, which was obviously really disappointing but also left me in a difficult spot so late in the day.

“It was a bit of a rush at that point to look at clearing options. I chose Hallam partly because of its location. I liked the idea of a city university, it was northern and Sheffield has a great reputation with students. But there were also practical experiences available on the law degree which made it really attractive.

“I spoke to one of the law lecturers, Mark Edwards, on the phone and that left me feeling really upbeat about the University and what the course had to offer. His positive attitude and description of the course had a big bearing on my decision. Once I was offered the spot at Hallam it wasn’t a difficult choice. I was really pleased that they wanted me and they were so encouraging on the phone. And now looking back I’m glad to say I made the right decision. I absolutely loved my time there and I wouldn’t be where I am right now if I hadn’t taken that path.”

Holly was initially concerned that going through clearing would be a negative experience and wouldn’t provide her with the opportunities she needed to pursue her dream career in law. She now feels that clearing offers opportunities to students, rather than barriers.

“I was originally worried that going through clearing would put me on the backfoot in terms of course choices and that it was a bit too close to the start of the university term to sort things like accommodation. But my attitude towards clearing completely changed following my own experience. Clearing can actually be a great opportunity for students. You suddenly have bargaining power with your grades. Going through the clearing process was very simple and the logistics following that, for example advice on accommodation and an open day for clearing students, made everything straightforward and meant I felt at ease about the next steps.

“My advice to other students, particularly those who might be considering taking a gap year, is to see clearing as an opportunity.”

Holly recently became the University’s first ever recipient of a prestigious scholarship from one of the four Inns of Court – receiving her scholarship from Gray’s Inn. To be called to the bar and practise as a barrister in England and Wales, an individual must belong to one of these Inns. She will use the scholarship to fund the next stage of her legal training – the Bar Professional Training Course (BPTC) – at BPP in Manchester.

Holly, who hopes to forge a career in criminal law and has ambitions to become a Queen’s Counsel (QC) criminal barrister, has also been offered Pupillage (the final stage of training to becoming a barrister) from September 2017 following her BPTC with a Barristers’ Chambers in Preston.

“I wouldn’t be able to continue my training without the funding so the scholarships are really important for the progression of my career. The help I received from my tutors – particularly my mentor Gillian Pastuch – was absolutely phenomenal. I felt supported every step of the way.

“Whilst at the university I was also an active member of the Mooting Society, which was a really positive experience. Not only did I enjoy it, but it also gave me huge confidence and allowed me to put an important legal skill into practice right at the start of my career. They were able to offer me a more complete law experience, with practical law modules as well as work experience with a solicitors’ firm. Experience breeds experience – and I’m certainly benefiting from that now.”