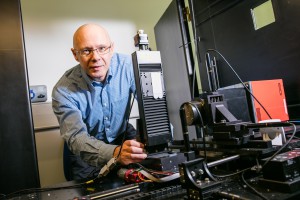 It was a successful night for Alliance universities as three institutions took home awards at the prestigious Times Higher Education awards ceremony recognising the impact they are having at home and across the world.

Nottingham Trent University won the Outstanding Contribution to Innovation and Technology Award for a project which has made a significant contribution to global security and the fight against terrorism. A new method of 3D X-ray imaging, developed by Paul Evans, Professor of Applied Imaging Science at Nottingham Trent University, is used to detect weapons and explosives hidden in luggage and has been incorporated into more than 4,000 systems globally.

During the inspection of an object, a single stationary X-ray source creates divergent X-ray beams capturing different views of the object, eliminating the need for multiple X-ray sources and complex movement mechanisms. The X-rays provide details of an object’s shape and depth, and recently the method has incorporated molecular signature techniques to identify specific materials.

The institution has also formed a spin-off company – Halo X-ray Technologies – with Cranfield University to commercialise the technology. The judges were impressed by the way the original research has been successfully commercialised, saying that the ‘pioneering research’ had ‘led to the development of 3D imaging that is now used worldwide in managing security and public safety’.

This is not the first time this work has been singled out for attention – it was recognised as part of Nottingham Trent’s 2015 Queen’s Anniversary Prize.

The Research Project of the Year Award went to the University of Salford for an international collaboration that has hugely increased understanding of how nuclear radiation affects animal life. Thirty years on since the Chernobyl disaster, the exclusion zone around the accident site is still heavily contaminated. Despite this massive challenge, Dr Mike Wood, a Reader in Applied Ecology at the University of Salford, working with academics from the UK’s Centre for Ecology and Hydrology and Ukraine’s Chernobyl Centre, has used the area as a laboratory to study the continuing effect of the disaster on wildlife.

Dr Wood set up more than 250 motion-activated camera positions and bioacoustics recorders to track animals over a year. The cameras provided more than 45,000 images, helping scientists find a thriving community of large and medium-sized species, challenging existing assumptions which suggested that mammals have declined in the area. Their findings have also contributed to high-level debate about the potential creation of a Chernobyl nature reserve and garnered a huge amount of press coverage.

Finally, the Outstanding Employer Engagement Initiative award was won by Liverpool John Moores University (LJMU) for their activity supporting the Sound City conference. Held in Liverpool in 2015, the event brought together 2,000 music industry professionals from 29 countries to discuss best practice and develop new business models and was followed by a festival attended by 72,000 people.  Much of the support for these events came from LJMU’s students as part of an initiative spearheaded by the employer engagement team.

The judges were impressed by how the students involved in Sound City ‘gained invaluable practical experience to enrich their academic study and gain rare insight into an important industry’. Students from eleven degree programmes from six schools at LJMU worked on the conference and festival either via a funded intern scheme or as part of the work-based learning required by their course. In all, 55 students gained a total 240 days’ work experience.

LJMU was also highly commended in the Research Project of the Year category for its Astrophysics Research Institute’s EAGLE project, a computer simulation of the evolution of the universe, while in the Business School of the Year Category Manchester Metropolitan University received Highly Commended recognition for its work on degree apprenticeships.

You can find out more about the THE Awards 2016 here.