Wonderland: the art of becoming human

We are sitting at the edge of row J in the Princess Anne Theatre, BAFTA. The winning film for the Utopia category in the AHRC Research In Film Awards 2016 is about to be announced.

The three of us, myself, Mark Prest and Michaela Jones, met less than a year ago. But at this moment I feel like we are family.

On stage the golden envelope is being opened.

As a group, Mark, Michaela and I have different lives. I am a university researcher; they work similarly long hours doing what they care fervently about too, but for little, if any, economic return. What we share is the experience of living with, or close to, addiction and recovery. 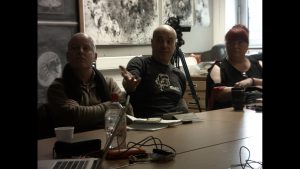 Our film, Wonderland, has won a prize and we go on stage to receive it and to say a few words.

Wonderland is about the utopianism of recovery. It suggests that if you bring recovery, art and social justice together, you can begin to imagine and work towards better, more just, futures.

The film was made as part of a ‘co-produced’ artistic research project, set up by and for people in recovery. It charts artist Cristina Nuñez’s use of photographic self-portraiture with a diverse group of people in longer-term recovery. It attempts to capture their ambitions to ‘feel and be felt by other feeling people’. 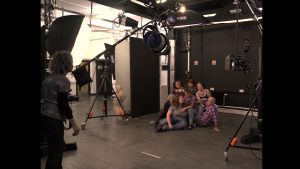 Made in documentary style, working with Huw Wahl as cinematographer and editor, the aim was to capture the creative process and relationships that play out during the course of Nuñez’s photography project.

Wonderland combines personal testimony with footage of participants taking self-portraits and work-shopping as a group. Over the course of 17 minutes, the viewer is exposed to the individual confidence and mutual bonds that emerge as the project comes to fruition. 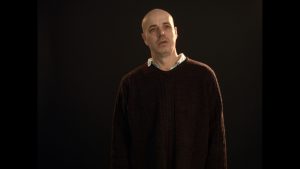 Research and cinema go back a long way – to at least the turn of the Nineteenth and the beginning of the Twentieth century, with films like Nanook of the North capturing the popular imagination. The partnership of film and research reflects film’s immensely inquisitive nature. And connected to that, the chemistry that happens when you turn on the camera. This reaction can be damped down, or it can be accelerated – used to heighten perception, inform, seduce, lecture, tell untruths, or move people.

I learned an approach to filmmaking that goes back to filmmakers like David MacDougall, Herb di Gioia and David Hancock who studied at UCLA in the 1960s. A core principle of their documentary work was caring about the relationship between participants, the filmmaker and time. They didn’t storyboard scenes or direct subjects or reshoot takes. They made durational films about people they were intrigued by, drawn to, and in some way loved – wanting to understand from their point of view their human, social and political concerns. Such films are infused with liveness and care. And although Wonderland was not made according to strict observational principles, it strives for the same level of emotional truth found in the films I admire.

Down by the stage we are doing an interview. The questioner wants tips about research and filmmaking. I mention the importance of working alongside people you trust on issues you care about. In academia, working with communities is sometimes talked about as if there is a public ‘out there’, just waiting to be engaged. My experience with Wonderland turns this perception inside out. Other human beings, with their very substantial knowledge of recovery, entered my (institutional) world and put time into educating and engaging me. For that, I am very grateful – and the nice thing is, I know it goes both ways.