Reader in Applied Ecology at the University of Salford 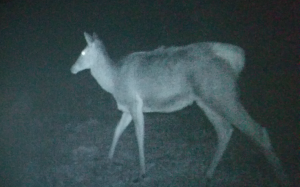 “Chernobyl” – to many this word evokes images of nuclear devastation, a post-apocalyptic world accentuated by the decaying remains of human settlement.  Films, books and computer games have all drawn on this imagery, presenting the area as a lethally contaminated landscape, inhabited by mutants – the stuff of nightmares. So it is perhaps unsurprising that when I first started talking to people about our research on the wildlife of Chernobyl that I got a few strange looks!  They wondered how a scientist could even survive working in this radioactive wasteland, let alone undertake research on wildlife! Surely everything is dead?

Given that our research in the region has recently led to the award of the Times Higher Education (THE) Research Project of the Year, there is clearly more to the story of Chernobyl and its wildlife.  Let’s look at the facts.

On 26 April 1986, a steam explosion in reactor four of the Chernobyl Nuclear Power Plant (ChNPP) complex exposed the core of the reactor.  Over the subsequent 9-10 days, large quantities of radioactive material were released into the atmosphere.  Prevailing winds shifted during this period so the plume direction was not constant.  Significant quantities of radioactive material were deposited in the surrounding environment.  The accident had a devastating impact on the local human population resulting in approximately 116,000 people having to permanently leave their homes. The abandoned area around the ChNPP has become known as the ‘Chernobyl Exclusion Zone’ (CEZ), an area the size of Northumbria that straddles the border between Ukraine and Belarus. 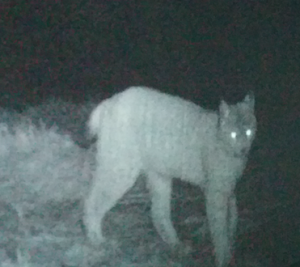 So how can we work there safely? Deposition of radioactive material in the area was ‘patchy’; the CEZ contains the most radioactively contaminated land areas on earth as well as areas where radiation levels are within the range of UK natural background.  In fact, radiation dose rates in many of the areas that we work are lower than the those we are exposed to whilst flying to the Ukraine as this Tweet from one of my PhD students demonstrates.

What about the wildlife?  The reality is that the removal of people from this large land area has provided an opportunity for nature to reclaim it.  Even in the face of radioactive contamination, ecological succession is transforming the patchwork landscape of villages, towns, agricultural lands, forests and wetlands.  Pripyat, the abandoned town closest to the ChNPP and home to the grey crumbling buildings that many think of as ‘Chernobyl’, is now more forest than town.  Roads and villages are disappearing into the undergrowth and the whole area is becoming wilder.

This rewilding has led to the return of many large mammals to the Zone and the growth in population numbers.  We have been using motion-activated camera traps to study the animals and have captured images of an amazing diversity, including red deer, wild boar, elk, bison, grey wolf, lynx and brown bear.  Our study of the CEZ wildlife has been covered by various media outlets, including the BBC.  However, there is considerably divergent debate over the impacts of radiation on CEZ wildlife.  This debate is evident in both the scientific literature and in the mainstream media, such as the BBC articles Wildlife defies Chernobyl radiation versus Chernobyl ‘not a wildlife haven’.  Some of the scientific studies, such as a study of insects and spiders in the CEZ, report significant effects at levels comparable with natural background dose rates in many countries. If these findings are correct, they have significant implications for the current radiation protection system for both humans and the environment.

A major challenge to many of the ecological studies published to date on the effects of radiation on the wildlife of Chernobyl is that the findings are difficult to independently verify.  Technological advances in photographic and acoustic recording techniques provided an opportunity for us to use ‘unbiased observers’ to capture data.  Thus our research is delivering new findings on the effects of radiation on Chernobyl wildlife which, for the first time, are fully independently verifiable.  Our analysis to date has demonstrated that the large mammal species found in the high contamination areas of the CEZ are the same as those found in the low contamination areas. We are currently using our data to evaluate whether radiation influences the population densities of these large mammals.

The work has led to a number of collaborations, including with colleagues in the THINKlab at Salford, who worked with us to develop Virtual Chernobyl.  This is a fully immersive Virtual Reality experience that allows members of the public to explore Chernobyl for themselves, visit the field sites where we work and draw their own conclusions on the state of the Chernobyl environment.  We have also partnered with Queen Mary University of London to develop an international science challenge, the Bird Audio Detection challenge, within which we are using some of our Chernobyl acoustics data as a basis for teams around the world to develop and test new techniques for automatically identifying bird sound within recordings.

This is just some of the work that we have been undertaking within the project and it has been a truly amazing journey.  The opportunity to work within Chernobyl and study the wildlife there is a privilege, the scientific advances and collaborations that it has led to are fantastic and to have all of this recognised with the award of THE Research Project of the Year is truly amazing.  Now is the time of year to reflect back on the last 12 months and what a year it has been.  I am looking forward to seeing what 2017 has to offer.

Dr Mike Wood is Reader in Applied Ecology at the University of Salford and led the research team that won the THE Research Project of the Year Award.  Key collaborators in this research are Professor Nick Beresford NERC-CEH and Dr Sergey Gashchak Chornobyl Centre.  Part of the ‘Radioactivity And the Environment’ TREE project, the research was funded by the Natural Environment Research Council (NERC), the Environment Agency (EA) and Radioactive Waste Management (RWM) Limited.