Millions of pounds awarded to tackle barriers to student success 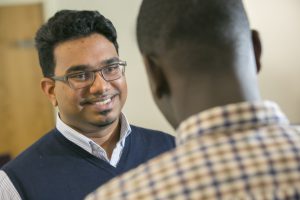 Projects to tackle barriers to student success led by Alliance universities working in partnership with other education providers have been awarded millions of pounds.

HEFCE announced that 17 projects will receive up to £500,000 each over two years from its Catalyst Fund to address differences in student outcomes. A total of £7.5 million will be used to tackle the causes of gaps in attainment and progression to further study and employment.

Students groups that will particularly benefit include black and minority ethnic students, students from lower socio-economic backgrounds, disabled students (including those presenting with mental health issues and specific learning difficulties), and mature and part-time students.

The programme will focus on scaling up activities already proven to be successful in individual higher education (HE) providers and identifying how good practice and intervention can be validated, replicated, transmitted and embedded across a wider range of providers.

This is an area where our group of universities have real strengths. Alliance institutions are the only mission group to achieve both our Widening Participation and Retention Performance indicator benchmarks.  Our report, Supporting Thriving Communities: The role of universities in reducing inequality, identified strategies for success drawing on evidence from across the sector and argued that widening participation needs to go beyond access to include ensuring students are supported to complete their studies and progress to further study or a good job.

Today’s announcement confirmed that seven of the 17 projects will be led by Alliance universities, in partnership with HE and FE education providers regionally and nationally.

Alliance universities are also partners on the following projects:

Kingston University on a project led by the University of Southampton, with co-partner University of Surrey, to maximise student success through the development of self-regulation. HEFCE has allocated £499,999 to the project.

University of Portsmouth will join King’s College London as partners on a £500,000 project led by the University of Sheffield on the ‘Raising Awareness, Raising Aspiration’ project – a targeted personal tutoring support programme for narrowing student gaps in student achievement and ambition.

Full details of the 17 projects can be found here.