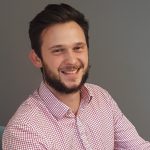 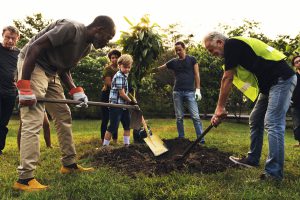 Alliance universities are no strangers to change. Whilst most of our member institutions are comparatively ‘new’ as universities, all have longer histories of their own, with the majority founded in response to the Industrial Revolution. Emerging in partnership with new industries and growing cities almost two centuries ago, this civic role remains at the heart of their mission, having evolved alongside the cities and regions they serve.

As the political upheaval of the past two years shows, the communities universities inhabit ask pressing questions of public policy and demand innovation from anchor institutions. Nottingham Trent University is demonstrating how modern civic universities can positively engage with the challenges facing their local regions, through a new think tank – the Nottingham Civic Exchange.

The concepts of ‘ordinary working families’, those ‘just about managing’ or ‘left behind’ have been at the centre of public policy debate in recent years, but far less time has been spent talking to the people to whom these labels are applied. As political debate catches up with concerns in the country at large, Nottingham Civic Exchange – working in partnership with the RSA – has undertaken to do just that and better understand what’s happening behind the data on a household level. 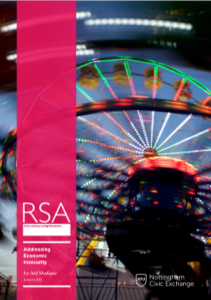 Nottingham Civic Exchange is a resource for Nottingham, connecting NTU’s social science research and the RSA with local people to tackle the regions socio-economic challenges. Although these challenges aren’t unique to the city, they’re typical of those facing policy makers and people across the country. In Nottingham, though, they are particularly pronounced, being one of the ten most deprived areas in England. The Social Mobility Commission’s 2017 State of the Nation report, which assessed English local authority areas as social mobility hotspots and cold spots, found Nottingham to be the thirteenth ‘coldest’.

Unlike other regions, the East Midlands currently lacks any Metro Mayors. Creating policies and identifying interventions for areas that have felt the full force of economic changes in recent decades, the Civic Exchange seeks to use existing policy levers to identify solutions the can have a local impact. Above all, the Civic Exchange wants to be defined by action, not just words.

Addressing Economic Insecurity is the Civic Exchange’s second report to be published since its launch last summer. The report takes the concept of economic insecurity as its framework to conceptualise what it means to be ‘just about managing’ in today’s economy, arguing that this approach has been underutilised in policymaking. Combining objective risks which drive economic insecurity such as unreliable employment contracts, alongside perceived risks, the report examines wellbeing on a household (as opposed to an individual) level. Economic insecurity, the report finds, is not just felt by those on the lowest incomes but is experienced across the income and class distribution, particularly those with lower-medium incomes. Overall, 75% of respondents expressed concern that the cost of living would continue to outpace wages.

Economic insecurity is deliberately defined in broad terms, to be distinct from inequality and poverty but relational to them. In addressing economic insecurity, resilience to a volatile job market is as important as creating more stable employment. As a social asset, though, resilience is not neutral, the research found; like social mobility and opportunity, so much depends on background. Lower earners are far less likely to feel confident that another in their household or network could help if unexpected financial difficulty arises; less likely to take career risks, such as job or industry switches; less likely to pursue education in later life. The distribution of economic insecurity creates a barrier to meaningful social mobility.

Chief among the macro policy aims of the Civic Exchange is a shift in emphasis from trickle-down economic growth to inclusive place-based growth. To encourage this, it has recommended that local employers, including universities, start locally with their procurement strategies and employee contracts; always asking if the decisions they make improve local people’s security. Throughout the year in Nottingham the Civic Exchange will hold focus groups with local households to inform social interventions that breed resilience, as well as produce a study on precarious work across Nottinghamshire.

The report’s findings reflect how people’s lived experience is shaped by the interaction of global economic forces and policy decisions taken locally and nationally – for many, this can be experienced in a way which feels distant and alienating. For universities, this demands a new civic role: a constructive engagement with problems and challenges facing society today, and using their convening power to bring together citizens, researchers, civil society and policymakers. The creation of Nottingham Civic Exchange is an important step in this direction.