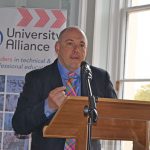 Chair of the Education Select Committee 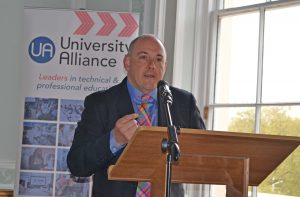 Robert Halfon MP, Chair of the Education Select Committee, gave the keynote speech at our Degree Apprenticeship event on Monday 23 April 2018. The text of his speech is below.

I’m delighted to be here today to discuss my two favourite words in the English language – degree apprenticeships.

I believe that degree apprenticeships are key to fighting both social injustice in our higher education system, and boosting this country’s productivity.

Students earn as they learn, they do not incur mountains of debt, and they get good quality jobs at the end. They also help us meet our skills deficit, so they benefit society too.

We know that degree apprenticeships are expanding and I’m delighted that there are now over 100 universities on the register of apprenticeship training providers.

But, I want to see more.

Our higher education sector is one of this country’s greatest strengths. But, it must not become complacent. For both students and industries a traditional three-year, full-time degree is no longer always the best option.

Our universities must diversify and modernise their provision. To meet our future skills needs universities will need to become more innovative and dynamic.

Higher education should have four purposes; education, providing a ladder of opportunity to the disadvantaged, skills and employability.

The Education Committee were pleased to take evidence from Aaron, a degree apprentice from Manchester Metropolitan University, as part of our inquiry into value for money in higher education. Aaron spoke very powerfully about the second chance his degree apprenticeship had given him, and the fantastic work experience he is gaining as part of the degree.

The Committee has taken evidence from several other University Alliance institutions; including Coventry, Nottingham Trent and Sheffield Hallam. All of which are expanding their apprenticeship provision.

I’m delighted to be joined today by Prof Quintin McKellar, Vice-Chancellor of the University of Hertfordshire, I know that his university are working towards 250 degree apprentices in the next year.

I am also pleased to speak alongside Lauren and Catherine who are working for their degree apprenticeship with Vauxhall Motors – an excellent example of a university forming strong links with local industry.

I was also pleased to hear the new Chair of the Office for Students, Sir Michael Barber, speak so positively about the growth of degree apprenticeships when he gave evidence to the Committee recently.

I know there is no lack of enthusiasm in the sector for degree apprenticeships. The challenge is for the system to meet the demand.

We still have a social justice problem in our universities.

The Sutton Trust told the Committee that the proportion of pupils from ‘low affluence’ households intending to attend university is the lowest in seven years. We know that state school entrants are stalling, and falling in some of our most elite universities.

There has in fact been a 16% decrease in undergraduate entrants from low participation areas between 2011/12 and 2015/16. This drop is due to the collapse in part-time students.

The National Audit Office has warned of a ‘two-tier’ system developing where the most disadvantaged attend the lowest ranked providers.

I would like to see the elite universities properly being held to account for the numbers of disadvantaged students they admit- and the support they receive whilst studying.

Perhaps we should regard universities as elite only if they are providing a real ladder of opportunity to the disadvantaged. Maybe universities should only be seen as ‘the best’ when they lead their students to well-paid job destinations and reduce Britain’s skills deficit.

The new Office for Students must lead in this. There must be sanctions from the new regulator for those universities who are failing in this regard.

I know that University Alliance universities are leading in taking students from disadvantaged backgrounds.

UWE Bristol takes 19% of its students from disadvantaged backgrounds, while 89% are employed or in further study six months after graduation.

The University of Portsmouth was top of the Economist’s “value-added” university rankings, which compares graduates’ wages with what they would have been expected to earn if they had not gone to that university.

In 2018-19 universities and colleges estimate that they will spend £860 million on their access agreements. I propose that some of this money could be spent on degree apprenticeships.

Degree apprenticeships can and must play a significant role in boosting the numbers of disadvantaged students studying at university.

I have been vocal in recent weeks in my defence of the Open University. The financial problems they are facing are deeply troubling and a symptom of a system which focuses on the wrong things.

The Open University provides a real ladder of opportunity in terms of social justice. Not only do one in 12 of all first-year undergraduate students come from poorer areas, but 55 percent of students are from disadvantaged backgrounds and 24,000 students with disabilities are enrolled at the OU.

Reversing their decline must be a priority for the Government’s recently launched review of post-18 education.

Alongside this, flexibility in degree apprenticeship courses is also vital. Apprentices must be able to ‘hop on and off’, transferring modules and ‘bank’ their learning. Doing this will help open degree apprenticeships up to the less advantaged, as well as older students who wish to study in a more flexible way.

In order to see the increase in degree apprenticeships I envisage, we must improve careers advice and guidance.

I have heard time and time again that students in schools and further education colleges are not getting the support and information they need to make an informed choice.

I too often hear that young people didn’t know about degree apprenticeships, and have fallen into courses that they’re not interested in, and drop out.

The application process needs to be as simple as it is to apply through UCAS at the moment- and I have been calling for a UCAS- style process for FE and skills for a long time. Making this a reality is key to helping more students into apprenticeships.

Not only do students need more information, but we need to educate parents and employers too.

Few parents are aware of degree apprenticeships, especially from disadvantaged families where the returns could be most profound. Both the existence of apprenticeships and the value they bring should be hard-wired into careers advice.

I said at the beginning of my speech that degree apprenticeships are vital to tackling this country’s productivity problem.

The UK lags behind most of its counterparts, with workers in the UK producing less in each hour they work than those in the US, Germany or France.

In fact, workers in Germany could finish work on Thursday and still produce as much as workers in this country in a single week.

More than a third of workers in England do not hold suitable qualifications for the jobs they do, and around nine million of all working aged adults in England have low basic skills.

The Fourth Industrial Revolution promises to dramatically improve our productivity, but we are told a third of jobs could become obsolete over the next twenty years. There will be fewer and fewer low skilled jobs to go around. We must do something about it now.

Our universities must take the lead in responding to these challenges and preparing students, young and older, for the changes ahead.

I would urge all University Alliance members to work with employers, focusing on local needs. I would also encourage them to work with their local further education colleges, to form partnerships and deliver degree apprenticeships collaboratively.

I look forward to continuing to work closely with University Alliance members in my role as Chair of the Education Committee. Working together to promote and encourage the expansion of degree apprenticeships.