The DTA is Intersectoral- Part 2 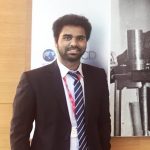 Doctoral Training Alliance researcher SreeHarsha Bandaru writes about his experience of crossing the divide between academia and industry, at the Nuclear Innovation Bootcamp, and how being part of DTA helped him to get there.

The Nuclear Innovation Bootcamp is a fully funded two-week intensive programme where 50 speakers, 30 mentors and 10 organisers help participants design a company and a product that will transform the creation of nuclear energy around the world. This year, in its fourth iteration, the bootcamp took place in Europe for the first time, at the headquarters of the OECD’s Nuclear Energy Agency in France. I was one of 28 participants invited to take part.

As the largest early career training programme for energy, the application process was hugely competitive. I was chosen from over 150 PhD students and early career researchers from around the world. Participants attended from the world’s leading universities and industrial organisations including Berkley, MIT, Imperial, Rolls Royce, Mitsubishi and the International Atomic Energy Agency.

The two weeks kicked off with an icebreaker challenge, to construct the tallest possible spaghetti structure, which could hold the weight of a marshmallow, which my team won. At this point, I had no idea that I would be the only participant to be a member of every winning team over the next two weeks. 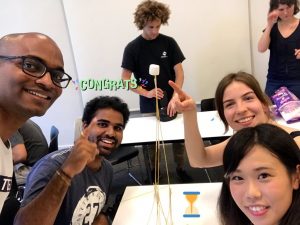 Over the course of the programme, there were more than 100 sessions all teaching us how to turn an idea into a great product. These included workshops, on transferable skills such as how to present our ideas, presentations and hands-on activities, all delivered by prominent academics and professionals from the nuclear energy sector. Over the two weeks I was able to network with directors and CEOs of the world’s biggest energy companies as well as government advisors and leading academics.

The main aim of the bootcamp was for participants to work together in teams to identify an innovative idea addressing a current world-issue to be pitched to a jury of experts. Some of the final proposals included using drone technology to detect cracks in concrete, using waste heat from nuclear energy in agriculture and using submarines to power towns after natural disasters.

After a gruelling idea generation session, where we generated more than 50 ideas in just 90 minutes, I teamed-up with seven other participants who, like me, had been very vocal on the need to tackle the climate challenge. We became the ‘Glacier Melt Mitigation Services’ (GMMS), tackling the huge threat posed by melting sea ice, which in 20 years is expected to cause sea levels to rise by over half a meter. This will significantly impact the Earth’s weather systems, leading to frequent destructive storms resulting in huge casualties and economic losses. In fact, if not addressed, glacial melt is predicted to cost $14-27 trillion dollars every year by 2100.

Our team’s proposal was to extend pre-existing glacial re-freezing ideas and use nuclear-powered ice breaker technology to pump nearby freezing water onto ice sheets. Using nuclear energy, rather than diesel or wind, would represent a huge reduction in costs but, even so, many on the bootcamp thought our project was crazily ambitious. I learnt to deal with this discouragement and to remain confident and motivated despite being told to consider something more viable.

Indeed, the whole team continued to push forward, often working late into the night. This hard work and preparedness paid off when, at the end of week one, we presented our initial ideas. Having a high quality presentation, full of content, meant we received very useful feedback and critique on our ideas, which we could learn from before the final presentation. Going through this process will stand me in good stead for my PhD where I may feel downhearted or demotivated but I have to remember to keep producing the best work I can. 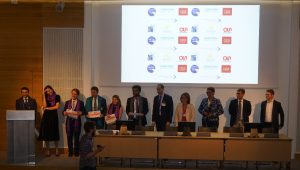 Presenting to the Judges

Participating in the bootcamp has also taught me how to work well in a team. Our group had the dual benefit and difficulty of being the largest team of researchers. This allowed us a range of expertise, and I was able to learn a huge amount from people of all different academic and industrial backgrounds, but it also meant we had the challenge of ensuring we all stuck together and worked towards an agreed goal. One of the greatest rewards of this whole process has been learning to manage differences and come together as a team.

As well as attending sessions and working on our project, we went on some fascinating tours of both the Google Arts and Culture Labs, where we saw the work they are doing with AI and deep learning, and the advanced research facilities at the French Alternative Energies and Atomic Energy Commission. I was also able to experience a new culture. Taking a boat trip along the Seine, visiting the Eiffel Tower, eating proper French croissants, exploring Paris and discovering its nightlife all added to this memorable experience.

Finally, at the end of the programme, we presented our idea to the judges. As we listened to the closing speaker and awaited their judgement, I was a ball of nerves, but as they began to expound on the type of project they were looking for, one that was innovative, disruptive and a game changer, I became quietly confident. As it turns out, I was right to be!

As well as the achievement of winning this prestigious event, my team (GMMS) has now been given the opportunity to present our winning idea at the I4N contest in Australia, rewarding innovative ideas, which contribute to the United Nations Sustainable Development Goals. This will give me the platform and opportunity to work with other young leaders in the field to apply my academic knowledge and skills to finding innovative industrial solutions to some of the world’s most pressing issues. Many thanks to both my supervisor Professor Victor Becerra and the DTA programme both of whose support has helped me get to this stage. 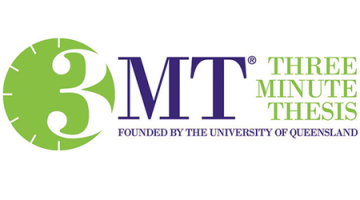 3 years in 3 minutes: DTA student success in the 3MT 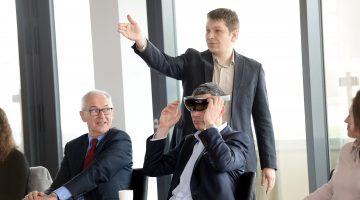 The DTA is Intersectoral- Part 4

The DTA is Intersectoral- Part 3