Some of the brightest minds from around the world come to the UK to study.

Alliance Universities are proudly international. We firmly believe our international students make a vital contribution to the collective strength of the UK’s universities and its economy, helping to cement the UK’s position on the world’s stage.

Therefore, it has been hugely concerning to hear recent reports that the Home Secretary is considering imposing restrictions on those from abroad who wish to study here.

Unwelcoming language and policies do nothing to grow the UK economy, research impact, or our cultural diversity.

These are individuals with real lives, with immeasurable talent to offer to our country – we should always welcome them with open arms.

In our latest series of blogs, we are profiling the international students who enrich our Alliance Universities with their talent and generosity.

From refugee to mental health nurse and the Olympics – Cyrille Tchatchet, Middlesex University 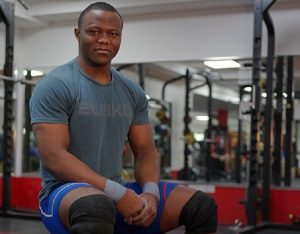 Middlesex University mental health nursing graduate and Olympic weightlifter Cyrille Tchatchet has overcome many challenges in life before achieving remarkable success in sport and in his studies.

Growing up in Cameroon’s capital Yaoundé, he took up weightlifting and competed at the 2014 Commonwealth Games in Glasgow and the 2022 Games in Birmingham.

Afraid to return to Cameroon and concerned about his safety, he fled the team camp and travelled to Brighton while still a teenager. After two months of sleeping rough he reached his lowest ebb, and contemplated suicide. He had enough credit on his phone to call the Samaritans, who he believes called the police and his asylum case was put in motion.

Cyrille, now aged 27, spent time in immigration removal centres before he was rehoused in Birmingham. While there, he joined weightlifting clubs and was soon competing at regional and then national level.

His experiences of destitution and depression in his early months in the UK inspired him to study as a psychiatric nurse and he was drawn to Middlesex University mainly due to its state-of-the-art sports and nursing facilities.

He was awarded a full sports scholarship by the International Olympic Committee’s refugee support programme, which proved invaluable to his weightlifting progress.

Since graduating with first-class honours in 2019, he has been appointed to a lead nurse role in Harrow, north-west London.

Cyrille was selected among 29 athletes who competed in the IOC Refugee Team at the Tokyo Olympics and was one of the flag bearers at the games this summer.

In the past, Cyrille has said how he “understood and hoped to support” fellow refugees.