BCU in collaboration with Bollywood and UK film makers 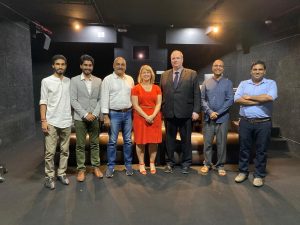 Birmingham City University has formed a formal collaboration with Mumbai-based Ronkel Media Education Institute, one of India’s most renowned creative institutions, to allow students to collaborate on major projects in the Bollywood and UK film industries.

A recent signed memorandum of understanding will support students in developing the valuable skills needed to help create, perform in or market a movie and allow them to gain experience oversees as part of a bilateral exchange programme.

For BCU students this represents an opportunity to work in a rapidly expanding industry in India with growing demand for a range of skilled artists, technicians and film business professionals.

Professor Alison Honour, Pro Vice-Chancellor and Executive Dean for Birmingham City University’s Faculty of Arts, Design and Media said: “This new partnership will provide opportunities for Birmingham City University and Ronkel students to work on collaborative film projects and have international work placements and exchanges to provide opportunities to gain skills specific to the UK and Indian Bollywood film industries.”

Sanjeev Sharma, Founder and Director of the Ronkel Media Education and Research Institute said: “Our association with Birmingham City University is a great opportunity for Indian students to utilise this platform to hone their skill sets in the best possible manner, and prepare themselves to be absorbed by the industry.”