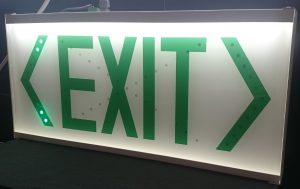 The IADSS concept implemented within a US-style emergency exit sign. The images on this page show part of the sequence of the flashing lights.

In an evacuation, every second counts. Whatever the situation, from a fire to a terrorist attack, people need to find the best route to safety as quickly as possible.

However, many of today’s signage systems lack the ability to respond to a rapidly changing, threatening environment, or even to be seen by the people they are there to assist. Their potential to be overlooked or to send people away from safety, and into harm’s way, makes them inherently unreliable in many of the situations for which they are intended.

In response to this problem, the University of Greenwich’s multi-award-winning Fire Safety Engineering Group has developed a new generation of advanced signage.  Known as the Intelligent Active Dynamic Signage System (IADSS), it uses flashing, running green lights, within the arrow of a standard emergency exit sign, to draw people’s attention. It displays a large flashing ‘red cross’ if people are not meant to go a certain way.

The signs can be 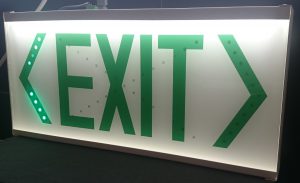 activated automatically when the alarm is sounded, and operators in a control room can close an evacuation route, using the red cross, if CCTV cameras reveal the route is unsafe. The entire system can be made ‘intelligent’ in response to computer-based evacuation simulations, taking into account smoke and fire conditions, and the location of people in a building, fed through from CCTV and fire detection systems. The software uses this information to activate the signage and begin an evacuation – minimising delays, injuries and potential fatalities.

Developed as part of the European Commission FP7 GETAWAY project, the system was tested in a series of trials, including two full-scale evacuations of a railway station.

Results showed that the combination of the flashing arrow and the red cross was quickly understood by most volunteers, and led the majority to use the correct exit. As well as being spotted more easily, the new signs also also reduced ‘decision-maki
ng’ time, with those who didn’t see the sign taking three times longer to make an exit route choice. 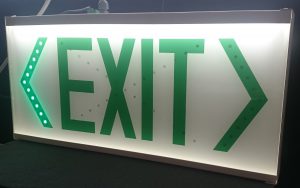 worked in partnership with a British company, Evaclite, to develop the signage system. Evaclite is currently quoting for the installation of thousands of the dynamic signs in several landmark buildings in the USA, Australia, UK and other parts of the world.

Professor Ed Galea, Director of the Fire Safety Engineering Group, says: “Having demonstrated its ability to improve safety in complex buildings, the system is now attracting significant interest from a growing number of potential customers, who recognise its significant advantages over conventional emergency signs. In the near future, all buildings will have this type of dynamic signage, making people safer and more secure in the event of an emergency.”Find out more about the Intelligent Active Dynamic Signage System here.