On a fine, if blustery, day in Salford Media City, students from Alliance universities across the country were arriving in town yesterday wondering which way the wind was going to blow.

The final for Enterprise Stars 2018 was finally here and the investors, Peter Down from Cariocca Enterprises, Tom Howsam from Paid and Tim Foster from Oxford Brookes University, were ready and primed to invest £5,000 in innovative ideas that most impressed them.

Entrants from 13 universities pitched their ideas at the University of Salford’s MediaCityUK campus, in a competition chaired by the university’s Justyna Turner, Enterprise Champion, and Alex Fenton, Lecturer in Digital Business.

After an in-depth discussion between the investors after hearing all the pitches, they decided on three winners. 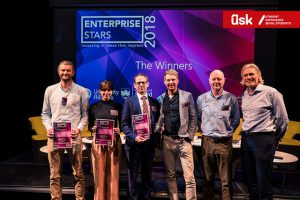 Three thousand pounds was awarded to aerospace students from Teesside University whose business idea is literally reaching for the stars.  Andrew Dunn and Ben Massey’s proposal, StratoBooster, will research, design and construct a small satellite launch platform. It will include a small rocket – the 30cm high StratoBooster – which ascends on a meteorological balloon to 30km and then fires its rocket booster to launch femtosatellites called ‘ThumbSats’ and small commercial payloads, in what will be the first civilian space mission to launch in the UK.

The Stratobooster delivery system would significantly reduce costs for the regular delivery of small payloads into space. The pair already have a number of customers engaged in the platform which would be located on Teesside University’s campus.

This aims to transform cities into places of equality and inclusivity, whether people are wheelchair users, visually impaired, parents with pushchairs or just carrying heavy suitcases. Sophia is drawing on her studies to devise a tool to tackle the physical and social barriers in our cities for people with disabilities or access needs.

She has developed a prototype map-based app which allows users to rate and review their city’s accessibility. It also allows them to find out which are the most accessible businesses and book ahead, with confidence, through the use of ‘scores’ on the doors of top-rated places and venues. For those businesses with low scores, Bee-Able will also offer bespoke architectural, planning and project management apps to address any accessibility issues highlighted by app users.

It supports children to become their best selves – and develop into fitter, healthier and happier individuals. Throughout his research, Matthew has worked alongside school educators and pupils to uncover new ways to increase children’s activity levels and reduce sedentary behaviours.

Coachoom is an online school-based health and wellbeing resource which help teachers with their classroom management strategies, providing a holistic approach to child development, focusing on the physical, mental and social development.