Skip to content
University Alliance > About us > Board Members > Liz Bromley

Liz Bromley was appointed as Deputy Vice Chancellor (Corporate) at UCLan in August 2016. In late 2018 she became interim Joint Institutional Head of the University, alongside Lynne Livesey, DVC (Academic). 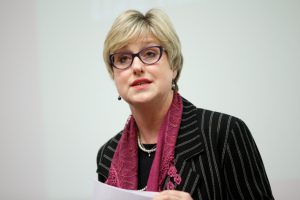 She joined UCLan in September 2016 after almost five years as Registrar and Secretary of Goldsmiths, University of London. Having read English at Worcester College, Oxford, Liz lived in the Middle East, teaching English and working for Japan Airlines before moving to Oman with a young family.

Liz joined the Open University in 1996, leaving eventually after serving a number of years as the OU’s first non-academic Associate Dean in the Faculty of Health and Social Care, responsible for academic staff working in the OU’s 13 Regional Centres. She then had a spell at the AUA as Executive Director, before joining Salford University as the Director of a brand new department, Student Life.

Liz is Deputy Chair of the Mulberry Multi Academy Trust, and works as a non-executive director on a number of Boards, including AHUA and Common Purpose. She also served for a number of years as a Justice of the Peace. She has four children, all of whom have lived through – and survived – the significant changes to Higher Education over the past 10 years, and a stepson who started at university in 2017.