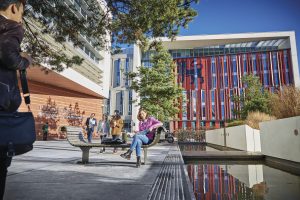 Birmingham City University is a large, diverse and increasingly popular place to study, with over 23,500 students from 80 countries.

Incorporating a heritage that reaches as far back as 1843, Birmingham City University today focuses on practice-led, knowledge-based learning, providing students with access to cutting-edge facilities and real-world experience. Students are placed at the heart of everything the University does, giving them the best opportunities for future success.

Birmingham City University is the largest producer of creative professionals outside the South East, with an internationally renowned provision that includes both a specialist music conservatoire and drama school, as well as Europe’s largest jewellery school.

The University has invested £260 million in its facilities, including a major expansion of its largest campus, situated in the heart of the UK’s second city. It is also a major player in the regeneration of the long-neglected Eastside region of the city.

Aside from this, Birmingham city was also the first university in the world to hire a Professor of Blockchain, and the first in the UK to run an undergraduate course in Black studies