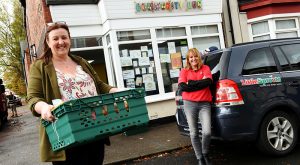 Teesside University academic Rebecca Walters has been supporting a charity during the ongoing pandemic to help disadvantaged members of the community.

Rebecca responded to an urgent social media appeal by Little Sprouts back in March, seeking help to deliver packed lunches to local children who would at that time have normally received free school meals.

Rebecca, a Senior Lecturer in Education in the University’s School of Social Sciences Humanities & Law said: ‘When I saw the social media appeal, little did I know how big it would become. It went from helping children on free school meals to supporting a much wider audience.’

Debbie Fixter, co-founder and manager of Thornaby based Little Sprouts, said: ‘We needed to act quickly when lockdown was introduced, so we issued a shout-out for volunteers and Rebecca was the first person to contact us.

‘What started out as distributing free school meals very quickly showed a gaping hole of need in the local community, compounded by Covid-19.’

Rebecca added: ‘I have been amazed at the impact such a small charity, which relies on donations, can have on the community. Supporting Little Sprouts has been very rewarding.

‘Just the small presence we have had based in the community hub has made a difference to some families and I am so proud to have been a part of it. Poverty is not just about limited money; it seeps into every area of a person’s life and can be debilitating.’

Debbie, a Teesside University BSc (Hons) Nutrition graduate, said: ‘It can be heart-breaking to see the difficulties which local people face on a daily basis, when all they’re trying to do is get by and look after their families.

‘Our volunteers have gone above and beyond to help, and we’re so pleased that we were able to adapt to the situation and find new ways of helping people during lockdown.’