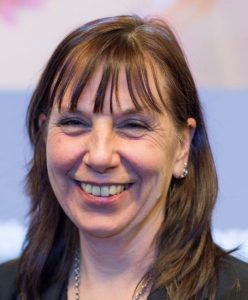 Professor Susan Brooks is Professor of Cell Biology in the Department of Biological and Medical Sciences and Director of Researcher Development for Oxford Brookes University.

Having done a BSc in Biology at the University of Nottingham, I secured a position as a research assistant working on a breast cancer project at University College London Medical School. I was lucky to have a very supportive and encouraging supervisor who encouraged me to undertake a self-funded part time PhD in pathology based on my project – so my PhD project was, in effect, my day job, and I was paid a salary whilst I was doing it.

During that project, I identified a marker that is present in breast cancer tissues at the time of diagnosis that predicts that the patient will go on to develop recurrences later. Subsequently, my findings were confirmed by other groups all over the world, and in a range of other cancers too, and that work has formed the basis for everything that I have done scientifically since.

Having continued with a couple of post doc positions, I joined Oxford Brookes University as a lecturer in 1995. I teach undergraduates (mostly about health and disease, pathology and cancer), oversee professional development for researchers across the University in my role as Director of Researcher Development, and head up a small research team. In 2021, I was involved, with two male colleagues, in ‘spinning out’ a company, MetaGuidEx, which aims to develop a simple blood test to predict whether a cancer has spread.

I come from a completely non-academic family. My father worked in a steel factory and my brother is a carpenter. I went to a big, urban state comprehensive school where I discovered that I was passionately interested in biology. I had no idea what sort of jobs might be open to me at that point, but I had a general idea that science might present more opportunities to me than history and English, my other passions at that stage.

So, I pursued biology through A’ levels and then to University, but still had no idea what I might do next. Although I loved my degree course, I never felt that I was very good at the practical laboratory work. However, that really changed in my final year when, as part of my course, I had to do an independent practical research project. Mine was about the biological adaptations that vampire bats have to accommodate their blood-drinking lifestyle. I had my own vampire bat to dissect and to study, and I was absolutely fascinated.

And, when I was about to graduate, my project supervisor changed my life: when I asked her if I could approach her for job references, still having no idea what sort of jobs I might apply for, she said ‘yes, and I assume you will be applying for research positions because you are so good in the lab’. It had never occurred to me before then that I might be able to have a career in science.

Yes, there have been many individuals who have inspired me – and who have helped my career as informal mentors and advisors, champions and friends. What they have had in common is a passion for their subject and a desire to foster and encourage that passion in others. Also a willingness to support, to help and to encourage when they have the power to do so.

I mentioned before that I come from a completely non-academic background, so when I consider the career that I have had so far, and the opportunities that have been afforded me, I cannot believe how fortunate I am. It is a huge privilege to have a job that is so endlessly interesting, challenging and ever-changing. There can be few things better than getting paid to follow your passions – and they include pursuing the research, which is endlessly interesting, of course, but also the privilege of teaching, and I hope in some cases inspiring the next generation of scientists, whether they be my undergraduate classes or my incredible PhD students and post docs.

For me, the main barriers have been those I have imposed on myself in terms of sometimes being reluctant to put myself forward or to take a frightening next career step. The encouragement and support of mentors and role models, as well as access to professional development opportunities, training and advice have been enormously empowering in overcoming these barriers.

One of the parts of my job that give me most satisfaction is being able to support the career development of others. Since 2006, I have had a split role within the University and for half of my time I am Director of Researcher Development. In that role, I oversee the career and professional development support for everyone who does research across the University, including research students, research-only staff and academic staff who undertake research. This includes, for example, providing training, support and advice around winning external funding, career progression, and commercialisation of research.

I also founded a very successful University researcher mentoring programme. In addition, I am senior postgraduate research tutor in my Faculty and have a major role in supporting research students and their supervisors, which frequently involves giving advice, support and attempting to resolve problems. And I do try on a day to day basis to be a supportive colleague and to provide practical help whenever it is in my power to do so.

Science is central to human endeavour for a whole variety of reasons – intellectual, practical, political and economic. It is therefore really important that there are not barriers that might prevent those who have the passion and the ability to pursue their interests and to make a successful career in science.